Superheroines have gone missing over the last few weeks. Wonder Woman gets a tip it could be the evil Granny Goodness! She goes to a small office to find clues. She sees a computer on and streaming. "Who are you and what have you done with Supergirl?" she asks. Lights flicker causing WW to seize up. Her muscles all tighten up and paralyze her until she falls to the ground unconscious.

Hours later she is nearly broken and begging to be allowed to climax. A text appears accross the screen asking, "What is the source of your powers?" WW is forced to answer. "The power of Zeus is in me" Again lights flicker causing WW to pass out.

Once again she awakens this time tied spread eagle on a bed. Her top has been removed to expose her breasts. Vibe still torturing her and her breasts have some sort of suction device draining her powers. Too weak to fight she is doomed. She is told that her powers will be used to strengthen her enemies and destroy her Island of women. "No, Please" She desperately begs but the vibe turns up and she climaxes until she is broken and drained. 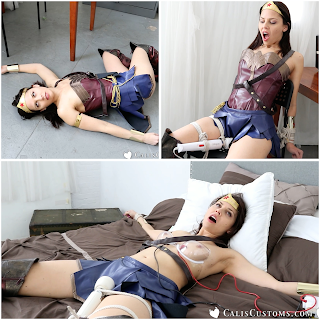