How Did You Find Me? with Hannah & Cali (exclusive)

A few moments later Hannah is strung up standing naked and has just enough energy to keep herself on her feet. The Black Widow comes back into the room and splashes water on Hannah’s face to surprise her from the last prodding.  Hannah looks in fear as she realizes her body is now wet as the Black Widow is waving her shock rod more and the water mixed with the shock rod will add even more pain to Hannah’s body.  The Black Widow laughs and tells Hannah she better speak up now that her body is all wet and it’s just going to get much worse with the rod from here on out.  Determined to keep her secret safe, Hannah tries her best to squirm free and escape, but her binds are too strong.  The Black Widow just laughs harder and pushes the prod everywhere against poor Hannah’s naked body. The water on her skin is making the shocking even worse and painful. She gets prodded on her tits, her stomach, her crotch, and everywhere else in between!

After several pain shocking moments, The Black Widow has enough playing of her new shock toy and tells Hannah that she can rest for now, but sooner or later there will come a time where she will get the information out of her newest captor one way or another before leaving Hannah in a weakened state.

*** This story was a CUSTOM commissioned project. Create your own fantasy by filling out the submission form on my CalisCustoms website*** 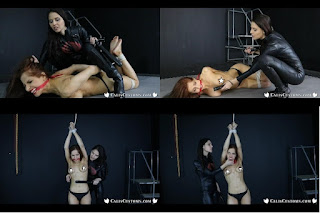