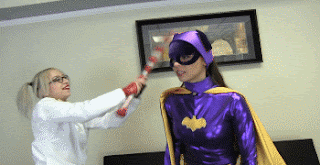 Batgirl has been feeling very stressed out lately with living a double life and all seeing so many terrible things happening in her beloved city of Gotham. She has sought out a therapist, but wanted to go somewhere discreet, so she has made an appointment with a doctor who is supposed to be adored by the rich and famous.
When she arrives, she immediately gets a weird feeling from the receptionist, but doesnt want to judge a book by its cover. When she gets in to see the doctor, things get even more strange! Batgirl knows she is looking for alternative medicine, but something just isnt right.

The first exercise leaves Batgirl feeling dizzy, then POW she is smacked in the head with a baseball bat. Its lights out! When she wakes up, she is even more confused, but the doctor convinces her that this is all just part of the therapy...then another K0.

The next time Batgirl wakes up she decides she has had enough and tries to leave. But the doctor is ready for her next move and presses the bat hard against her throat when she tries to leave. Out again Bat Brains!

Now Batgirl knows that the doctor is actually Harley Quinn, who finally reveals herself. She goes for some weapons only to find that Harley had removed her utility belt during one of her naps. Batgirl is so dizzy from all the blacking out that she is too weak to fight and HQ finds herself another opportunity to put her unwilling patient back to sleep.

Harley decides that Bagirl is being a bit too frisky and chains her up so she cant try to run away again. She has always been curious about the superherione's true identity, so when Batgirl wakes up, she lifts her mask to reveal that Batgirl is actually Cali Gordon! She gets so excited that she beats the bound bat up a bit more and puts her into a devastating head scissors. You guessed it, K0ed again!!

Batgirl looks so cute, that Harley begins to wonder how SHE would look in her stuff. She puts on Batgirl's cape, gloves and cowl. When Batgirl wakes up she is mortified and tries to use reverse psychology on Harley as a last resort effort to be let go. Unfortunately, it doesnt work and she is once again met with a hard BANG to the head. Harley is bursting at the seams with joy knowing that Mr. J is going to be so proud of her!